Day of the Dead…

Posted on October 31, 2014 by David and Sharron Mathis

This week as many of your children don their masks and costumes going house to house in search of the best candy, we in Haiti will not…Halloween isn’t something celebrated in Haiti.  However “All Saints Day” celebrated on Nov. 1st followed by “All Souls Day” celebrated Nov. 2nd; are Catholic traditions blended with Ghede (GEH-day), the Voodoo celebration of Day of the Dead.

Ghedes are part of the pantheon of gods known as Loa’s (Loh-WAH)…it has been said there are as many as 402 of them within Voodoo religion.  Ghede, as the ruler of death, embodying the principle of resurrection, governs the preservation and renewal of life. Sometimes referred to with affection as Papa Ghede, he is led by Baron Samedi, the god of death in Haiti’s Vodun tradition.  Ghede controls access to the afterlife but Baron Samedi controls the souls of the dead.

Haitian’s will put on their Sunday best, heading out to church first thing in the morning to pray.  Many will then go home and put on the attire of the “ragtag Ghedes”, as the spirits of the underworld are often called, or of the elegant Baron Samedi (SAHM-dee) in his black, white and purple color scheme.  An outfit can be as simple as a white blouse, skirt and purple neck scarf or it can include a black top hat and tails, a baton or cane, and a red bandanna or multicolored necklaces.

It’s common to wear makeup – painting half their face white with black around the eyes or dusting the face with flour. Once dressed, celebrants head out to the town cemetery where those who have ancestors buried there will clean the tombs of their loved ones and leave food for them in an act of remembrance.

Spiritual adepts, women called mambos and the men called houngans (HONE-gahn), joined by drummers and singers, will pray at a cross rising from a tomb…the symbol of Baron Samedi, summoning the spirits.  Then the partying begins.

The apparent contradiction may be difficult for North Americans to comprehend.  The god of death, Baron Samedi pokes fun at death and with his raunchy humor and suggestive, lewd dancing makes fun of the human passion that brings life.

A typical altar in honor of Ghede could include cigarettes; a small white image of a skull; white, black and purple candles; satin fabric in the same colors; clarin (strong rum), a Haitian white rum spiced with habanero peppers; crosses; a miniature coffin; sequined bottles and a chromolithograph of St. Gerard; a saint associated with Baron Samedi. 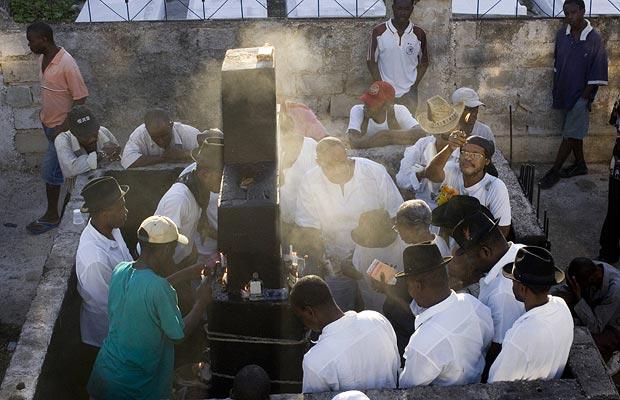 With a population of over 10 million, Haiti has many followers of Vodun (VOH-doon), a religion that accommodated the practices and principles of captives from Africa who were brought to the island during the slave trade.

Evangelical believers in Haiti do not celebrate this holiday, it’s more likely they’ll spend their day in church praying.

We write this not condoning the celebration but inviting you into the context in which we live.  To our North American worldview this seems bizarre, hard to understand, difficult to make sense of, but this is Haitian reality; truth to many people here in Haiti.  Spirits are as much of a reality as the living and their presence play into everyday life.

Ministry here is very difficult at times, because our truths are not the same.  A worldview change has to happen to touch people at the core their beliefs.  Feeding, building or giving things will not change Haitian worldview…only the intentional work of disciple making will bring a culture in alignment with a biblical worldview.  Both American and Haitian cultures need to embrace this reality if we want to see our countries thrive and honor God.

The cool thing is the Haitian church and North American church can work as equals in this endeavor to see God change our countries from the inside out. This is the heartbeat of the Haiti Consortium.  To learn more read below…

This entry was posted in Uncategorized. Bookmark the permalink.

3 Responses to Day of the Dead…