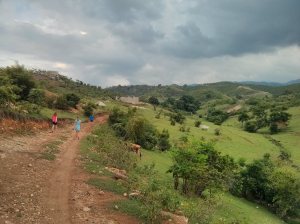 Haiti, located on the western end of Hispaniola, is slightly smaller than Maryland.  It’s bordered to the east by the Dominican Republic.  Haiti is a beautiful Caribbean nation located less than 700 miles from the coast of Florida.  On January 12, 2010, a devastating earthquake struck Port-au-Prince, Haiti. 300,000 were killed and an additional one million people were displaced as a result of the earthquake.

Prior to the earthquake, Haiti was the poorest country in the Western Hemisphere.  The earthquake exacerbated this desperate situation.  Thousands were driven from their homes and forced to live in tents located in fields and on sidewalks.  Many of these families continue to live without clean water, proper sanitation, or adequate nutrition.

The estimated 2012 population is 9,801,664 people. The median age is 21. Life expectancy is 61 years for men and 64 years for women. The official languages of Haiti are French and Creole. The adult literacy rate is 53%.

Half of children do not attend primary school. This lack of education has led to an adult population with a literacy rate of only 53%. Only one in five attend secondary school.  In order to send a child to school a family must pay.

The infant mortality rate is Haiti 52 deaths per 1,000 live births. 1.9% of Haitians are infected with HIV/AIDS, resulting in 7,100 deaths per year. 37% of the population does not have access to clean drinking water. 83% do not have adequate sanitation facilities.

Statistics were gathered from UNICEF, The CIA World, Factbook and CGAP.